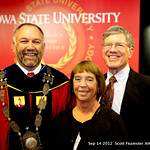 Students of Ames Senior High, Proud of our school are we.
Cheering the orange and the black, On to the victory.
Rah! Rah! Rah!
Comrades in work and in play, Loyal and true are we.
Doing the best for our high school. Ames Hi Aims High.

During our very special Iowa weekend, we shared many wonderful walks down treasured memory lanes. When we moved out of Iowa, we took Iowa with us in our hearts. Carolyn so much enjoyed AHS Class of 1962 hospitality that she decided to party with us rather than cheer ISU to victory over Western Illinois. We look forward to the next AHS Reunion.

The Ames High School Class of 1962 is awesome! Thank you very much again for helping make our 50th reunion so meaningful. 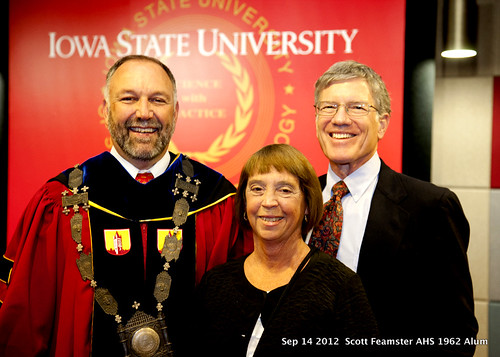 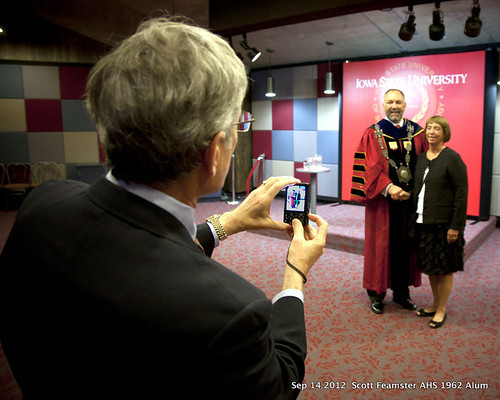 PS: Bells of Iowa State, inscription on a Bell

Then pealed the bells more loud and deep;
"God is not dead; nor does He sleep;
The wrong shall fail
The right prevail-
With peace on earth, good will to men."

-- Henry Wadsworth Longfellow
Written during the Civil War
From Luke 2:13-14 Thank you,

PSS: Reflections on Growing Up in Ames, Iowa

After living in numerous southern cities including New Orleans, Louisiana, where I was born and Daytona Beach, Florida, where my sister Susan was born, my mother, Susan, and I moved to Ames, Iowa, in 1955. I was age 11 in fifth grade.

We lived in a small Cape Cod house at 1220 Harding Avenue. My bedroom was under the attic eves. We all shared one bathroom. I showered at a shower head in one corner of an unfinished basement; it was very cold in winter. After snowstorms I shoveled six-foot snow drifts covering our front walk and driveway.

In addition to regular chores, I painted the inside and outside of our home. To earn money I delivered the Des Moines Register and Tribune seven days each week; I earned a Des Moines Register scholarship. I worked summers doing chores for neighbors and working in the Bitumen Research Laboratory at Iowa State University; as part of this research, I took asphalt core samples from U.S. Highway 69.

I attended Roosevelt Elementary School, Central Middle School, and Ames High School. While attending Roosevelt I was the school crossing guard at Harding Avenue and 13th Street, which was close to the edge of town. I rode my one-speed Schwinn bicycle on Highway 69 to Ames High School (which was downtown at that time); on winter days it could be a sheet of ice. I carried school books in one arm with my saxophone case hanging on my bicycle handlebars. Big rig 18-wheeler truck drivers would blow their horns when they passed me. I played saxophone in the Ames High School concert band, pep band, dance band, and marching band; after marching as right guide, I emptied my saxophone bell of trash deposited by children along the parade route. I also played with the Ames Municipal Band; we played summer concerts in the Band Shell and marched down Main Street on national holidays. In high school I auditioned and was selected to sing in the Iowa All-State Chorus, which sang annually in Des Moines; at that time I sang tenor. I was elected Treasurer of my AHS senior class.

We worshipped at Collegiate Presbyterian Church on the border of Iowa State University; in addition to Sunday School, every Wednesday was church night. I was elected President of the Presbyterian Iowa Youth Synod and elected to the Presbyternian National Youth Board. I was a Cub Scout, Boy Scout, and Explorer Scout; I earned Eagle rank and the God and Country award. My Explorer Post backpacked the Rocky Mountain backcountry wilderness using pack mules at Philmont Scout Ranch in New Mexico.

In summer I rode bicycles to Carr's Pool and ate hamburgers at Henry's Hamburgers. I played on tennis courts and ice skated on flooded tennis courts in Brookside Park. In winter I also skated up Squaw Creek. I learned to roller skate at Skateland; one night I won a silver dollar, the only silver dollar I've ever won. I learned to bowl at 20th Century Bowling; I mastered gutter balls. We climbed and picnicked at Ledges State Park in Boone west of Ames. Iowa picnic cuisine featured fried chicken, hot dogs, deviled eggs, cole slaw, potato salad, baked beans, peanut butter sandwiches, s'mores, lemonade, and Kool-Aid. For Sunday dinner we sometimes ate at The Fjord, a Norwegian restaurant in Huxley; I particularly enjoyed its pickled herring. Some Sundays we drove to Des Moines for dinner at Bishops Cafeteria; we would later watch a Douglas DC-3 land and takeoff at Des Moines Airport.

Every Thanksgiving we drove to Cedar Rapids for dinner and cards with Greer relatives at Aunt Ethel's home. Every Christmas we drove to New Orleans for a family Christmas with Grammy and Grampy; we enjoyed seeing Christmas trees through ornate cut glass doors. One summer family vacation we toured the Black Hills, Badlands, and Mt. Rushmore in South Dakota. On another family vacation we toured Yellowstone National Park; to get warm in the morning, we built fires in our cabin's potbelly stoves.

I put myself through Iowa State initially by serving meals at dormitories and sororities and by assisting research at the Ames Laboratory. I later became the first Chemical Engineering co-op student and worked at the DuPont Film Plant in Clinton.

Upon graduation from Iowa State, I started work at Exxon Research and Engineering in New Jersey. I later married Carolyn, who graduated from Iowa State and moved to New Jersey for work in biotechnology.

My mother was living in Ames when she died. In honor of our Scottish heritage, bagpipers performed at her Ames memorial service and New Orleans graveside funeral service.

I moved from Ames but Ames remained in my heart. Ames High School gave me the foundation for my life. "Ames Hi Aims High!"